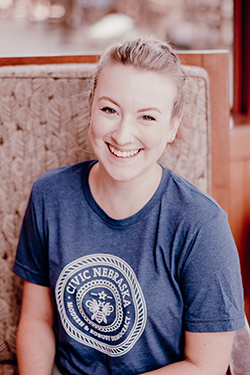 Chandler Dulin is Civic Nebraska’s school community coordinator for the newly formed Community Learning Center at Randolph Elementary School in Lincoln. The Randolph CLC is a program within our Youth Civic Leadership initiatives and officially kicks off Aug. 12. But Chandler is already hard at work building an after-school team to serve the Randolph community.

As school community coordinator, Chandler advocates for youth, families and neighborhood residents; works with the Randolph community to create robust programs for kids; manages partnerships, projects, and relationships to benefit the CLC; and plans, schedules and directs daily routines, activities, and operations of the new after-school program. She also will be the point person for neighborhood, community, and other projects among the CLC and its community. Chandler began her new role at Civic Nebraska on July 1.

A native of North Platte and graduate of North Platte High School and the University of Nebraska, Chandler most recently worked with CEDARS Youth Services as the organization’s emergency shelter program director. Prior to that, she worked with Resources for Human Development, a nonprofit that empowers people in vulnerable circumstances to build the highest level of independence possible. A psychology graduate from Nebraska U., Chandler’s area of expertise is trauma-informed care.

Chandler lives in Lincoln with her dog, Dude; her cat, Nags; and Rosie the hamster. In her spare time, she enjoys painting, drawing, and reading. She was raised as an only child and studied dance for 12 years; now, she has a 12-year-old stepbrother and she couldn’t be prouder to be a big sister. We’re glad to have her on our team!