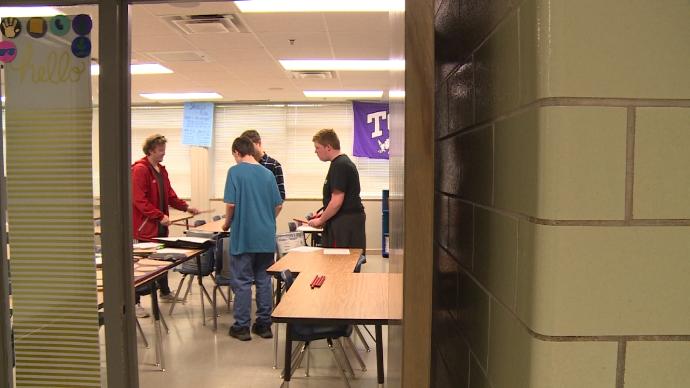 One of those a drum club – created and taught by two Husker marching band members.

Wednesday’s after school at Dawes Middle School has taken on a new meaning for drum club students. Who say without the help of this program, they may not be able to pursue their passions for music.

“I’ve been playing for a while now but I’ve noticed just small things that when you’re in a full band you can’t notice,” said Dorian Avig, an 8th grader at Dawes Middle School. “When you’re one-on-one it’s a lot easier to notice small form and technique errors.”

It’s a club that brings a sense of deja vu to its founder whose first crack at starting clubs, was another drum club.

“This past semester at UNL in the Honors Program, I heard they were offering that we could pitch an after school activity,” said Jared Noetzel, who is an honor student and in the Cornhusker Marching Band. “I decided I wanted to bring drumming club back but in a middle school setting to teach technique and getting people prepared.”

For the middle school students here, an opportunity to train with some of the best around, does not go unappreciated.

“They don’t have to come out here, they don’t have to do this,” said Donavan Appling who is an 8th grader at Dawes Middle School. “They do it because it’s something they want to do and they’re not charging anything for basically private lessons.”

Husker band members say that the music is important to them, so being able to share it directly with their community is the best performance.

“Its important for us just as college students. Were in such a place of privilege that we have the responsibility to teach others music so I think it’s our duty to spread that to others,” said Noetzel.

Wednesday was the last drum club of the school year but Husker marching band members do say they plan on continuing the program next fall.